Facts and Figures of the UK 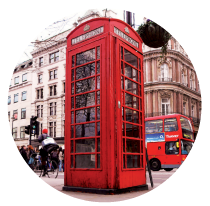 There are the British, the Welsh, the Scottish and the Irish. The majority is British, making up 80% of the total population.

The United Kingdom has a temperate climate. It has a mild climate and is usually cloudy. Sunny days are rare. Average temperature in Summer is 17°c while in Spring and Autumn is 8-10°c. In Winter, average temperature can drop to as low as 2-7°c. Some places may even snow during January and February.

The UK is in the GMT (UTC+0) time zone. In Winter (October to June), Hong Kong is 8 hours ahead of the UK, whereas in Summer 7 hours ahead when the UK adopt the daylight saving time.